By: Gerelyn Terzo of Sharemoney

When emerging markets are being discussed, the BRIC nations often come to mind — Brazil, Russia, India, and China. South America’s fourth-largest economy, Colombia, may not be included in this group, but that doesn’t mean it doesn’t have all the makings of an emerging market economy.

In a nutshell, an emerging economy should be somewhere in the middle of the spectrum in terms of how growth is happening — not overly fast and not overly slow. While Colombia’s economy has shown green shoots of stability, it has been one step forward and two steps back in many ways for the country.

Colombia faces numerous headwinds, which in addition to crime and a cocaine epidemic, has been its economy. Policymakers have had to grapple with rising inflation and a crippled tax structure in need of an overhaul, the latter of which is currently underway via a $4 billion tax bill. Despite its headwinds, Colombia is considered a major player in the Northern and Western hemispheres.

The size of the South American country’s economy is $271.5 billion as of 2020, according to the World Bank, contributing 0.24% of the global economy. Meanwhile, output has been on the decline for years amid Colombia’s large baby boomer population. More than 9% of Colombia’s population is at least 65 years old. Oil production has also been on the decline, which threatens to stifle GDP growth. 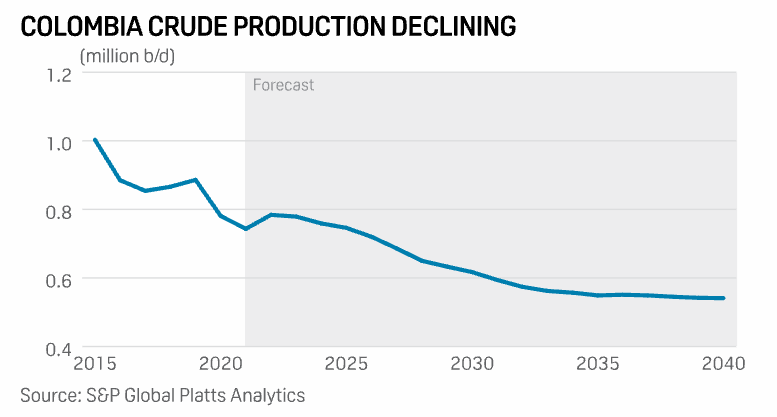 Taken together, Colombia is in the unique position to qualify as an emerging market economy.

One surefire way to spot an emerging economy is from the pace of economic growth. Considering that emerging markets are coming from a lower base, they tend to expand at a faster clip vs. developed nations. Colombia fits this criterion. GDP expanded at a rate of 3.3% in the year before the pandemic, 2019. The Central Bank of Colombia forecasts GDP will increase 8.6% in 2021, up from a former estimate of 7.5%. Colombia’s economy shrunk at a rate of 6.8% during the pandemic year of 2020, while the poverty level worsened by 5.5 percentage points. Nearly one-third of households could not afford three square meals a day last year, almost three times the rate from before the pandemic.

Another way to measure GDP is on a per-capita basis, which is economic growth divided by the size of the population. Colombia’s GDP per capita is $5,389, as of 2020, down from $6,546 in 2019. To pass the muster as a developed market, a country should have a per capita GDP over $12,000. The United States, meanwhile, has a GDP per capita of more than $63,500. Yet when you compare Colombia’s GDP per capita to developing nations, it shines. As long as Colombia strengthens its standing in healthcare, life expectancy, and quality of life alongside economic expansion, it is moving in the right direction.

Quality of life for Colombia’s population of roughly 51 million, most of whom reside in urban areas, is lacking, as evidenced by the country’s Human Development Index (HDI). The HDI is based on factors such as healthcare and education, and Colombia’s hovers below the targeted range. A country should have at least a 0.8 HDI reading to qualify as a developed country. In Colombia’s case, its HDI is 0.767, giving it a ranking of 83 as of the year 2020. By way of comparison, the United States boasts an HDI of 0.926 while Norway sits atop the heap at 0.957. 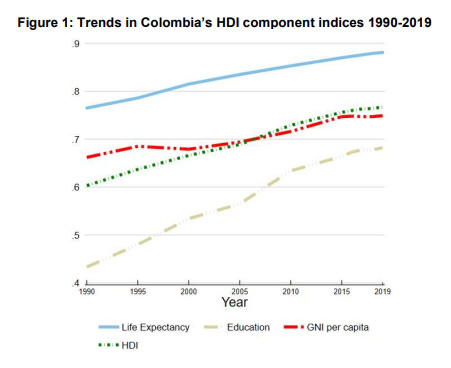 In September 2021, Colombia’s central bank raised interest rates for the first time in five years. They increased borrowing costs by 25 basis points to 2% in an attempt to stem the tide of higher inflation. Last year, policymakers slashed rates to prop up the economy during the pandemic. The Central Bank of Colombia forecasts an inflation rate of 4.5% for 2021, up from 2.5% in 2020 and well above its target rate of 3%.

The population has been dealing with rising inflation as food prices have inched higher and the peso has depreciated against the U.S. dollar. Colombia’s inflation has been increasing amid capital injections into the economy by central banks, including the U.S. Federal Reserve, which is expected to begin tapering its economic stimulus in the country sooner than later.

Meanwhile, Colombia still suffers from sky-high unemployment. As of August 2021, the rate was 12.3%, which was actually the lowest level since the start of the pandemic in early 2020. Despite the double-digit percentage rate, unemployment in the country posted declines for three straight months, which bodes well for the population finding jobs as the economy recovers. Nonetheless, of those working, more than one-quarter of them say that they are under-employed and are not earning enough to pay their bills.

Fork in the Road

Colombia’s economy was growing at an average yearly rate of 4.3% before the pandemic, which was close to twice the rate of its peers in the Latin American region. The middle class was on the rise, as was tourism, while poverty was dropping, albeit not as fast as countries such as Chile and Peru. COVID threw a wrench into Colombia’s progress, however, and where Colombia goes from here depends on the changes that are implemented.

The World Bank describes two potential scenarios, one worst-case and one best case in nature. In the worst-case situation, Colombia’s economy would only grow 4.2% this year and not revisit pre-pandemic levels until 2023, paving the way for poverty to worsen. In what the World Bank describes as a baseline scenario, Colombia’s GDP would expand by 5% in 2021 to revisit 2019 levels in the middle of 2022 amid stronger domestic demand as well as recoveries in commerce and the manufacturing sector. Poverty would improve in 2021, but it would persist above pre-pandemic levels for a while.

For a better outlook to materialize, Colombia’s government must have a successful vaccine rollout that is supported by a “strong fiscal package” that will pave the way for higher revenues in the private sector and improvements in the fiscal deficit. If Colombia can pull this off, its poverty rate is likely to fall though it is a long way from being eradicated.

3 Things You Need to Consider Before Starting a Business

How To Find A Tax Incentive Program For Your Business

A Complete Guide to Brand Trackers

The Brief Guide That Makes Invoice Reconciliation a Simple Process